One of the things which has pissed people – and especially women – off about the Socialist Workers Party is the determination to attribute a meaning to the word ‘feminism’ which fits with a simplistic class instrumentalist account of women’s oppression considered suitable for consumption by the membership.

Let’s take a trip in the mind of Judith Orr, the party’s oracle on what ‘feminism’ is really all about. On 9 March, Socialist Worker ran an article for consumption prior to the special conference, apparently to arm those who may have forgotten what the line is with some crap arguments against anyone who has got ‘confused’. Consider the following:

“Socialists stand with all those fighting sexism. We help build campaigns for abortion rights, equal pay and against discrimination. But we also argue that, while oppression can’t be reduced to class, it is rooted in the rise of class societies and the family.”

There are a number of issues with this:

1. It is a classic specimen of SWP argument which begins “socialists believe” and continues with “we argue that” – a little rhetorical trick to persuade the reader that the opinion you are being asked to hold is an objective truth. It’s like an advert with the voiceover “all mums want nice white sheets… we mums know that Persil is best”. The time for this kind of propaganda has passed. Even if it were a proper way to win an argument rather than sell a product (which it isn’t), the general population has moved on, especially younger people to whom the party aims to appeal.

2. “We help build campaigns” – really? Of course a lot of members of the SWP are committed activists when it comes to women’s liberation. But a lot of members have faced pressure for their involvement with, for example, feminist societies on campus. When the Slutwalk protests were called, the party was left scrabbling around for a position which could make SWP sense of the use of the word ‘slut’ while being an active part of the campaign – and in some areas, SWP members weren’t that welcome on Slutwalks at all. The purpose of this is not to slate the activity of the SWP, but to point out the circular logic: “we are the best campaigners because we have a proud tradition on womens lib”, and “we have a proud tradition on women’s lib because we are the best campaigners”. The SWP is not the best campaigning force on women’s liberation, and it’s time to admit it.

3. So the SWP argues that the oppression of women is rooted in the role of the family and the development of class society. Wow! I actually thought the SWP had a monopoly on this novel idea for quite a while. It turns out that the SWP hasn’t copyrighted Engels – but it is one of the few organisations with a clear position on women’s lib which basically stops at Engels. All sorts of other people have an understanding of sexism which is rooted in historical materialism. There are even whole schools of thought called materialist and Marxist feminism. Just fancy! 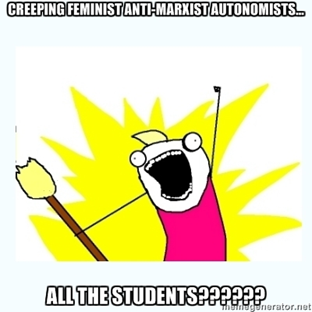 Here is what other women’s lib campaigners are saying: 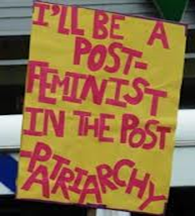 This kind of statement would get you sneers and a talking-to in the SWP. It has all the evils in it.

FEMINIST – means women who think all men are tied into rape culture, and a rejection of historical materialism, right? No, it can just mean: 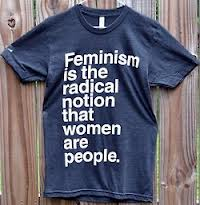 A general theme of the SWP’s argument is this: why get all attached to the notion of ‘feminism’ when we have an analysis of why women are oppressed which locates the most meaningful struggles within the working class fightback? No need to waste time navel gazing in a safe space about your experiences with other self-defining feminists, just build Unite the Resistance and it’ll all come out in the wash.

This kind of rejection of feminism as a movement is offensive when so many women (and men) have risked so much and put so much energy and time into arguing for women’s rights. We should be proud to call ourselves feminists, and to be part of a rich and varied tradition which unites on campaigning for the social, economic and political equality of women. There’s another good reason to not reject feminism: 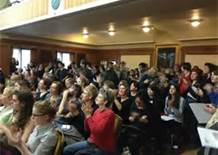 PATRIARCHY – this means that you think all men are innately evil, women should live in communes for their own safety and working class organisation won’t change this, right? No. It means you have noticed that men tend to be represented disproportionately over women in various ways, and that this contributes to the perpetuation of the oppression of women.

It means that is sexism which is ‘creeping’, not feminism. Sexism can seep into all institutions, organisations, friendships – even into the SWP.

The SWP knows this really, as it tries (in its miserable way) to compensate. But because it has developed such an awful tendency towards bureaucratic organisation and favours unquestioning obedience, it ended up with women on the disputes committee asking the worst kinds of questions of a member complaining of sexual misconduct.

That they posed those questions does not mean that those women have shit politics, or that they are evil, or that the SWP is a ‘rape cult’. It reflects a structural issue which, for many reasons now coming to the forefront of debate, the SWP has decided to completely deny. It is an institution which has failed to counteract the patriarchal tendencies of capitalist society – easily done, hard to acknowledge.

Sexism and other forms of oppression creep along on the back of our divided society, driving in further wedges to alienate us from each other and the real forces of oppression. Along the way, sexism gathers its own momentum and has an impact which can be analysed in its own right without abandoning the Marxist tradition. The methodology of intersectionality demonstrates this. Privilege can be understood within a historical materialist framework.

Patriarchy exists, you can see it in front of your face – we need to discuss the reasons why. Now let’s try and join in with all the others who are already thinking and doing things about this in the real world.

Posted by Daphne Watermelon at 15:40